My son has wanted to go to Disneyland since the first time he heard about the place. He’s a huge fan, watching the movies over and over again on his computer and memorising all the best lines. Beauty and the Beast is his favourite, something about the story of a love that must see beyond the outer shell appeals to him. It is easy to see why. Felix is a profoundly disabled child, he has a rare condition called Nemaline Myopathy that affects all his muscles. He drives a power wheelchair, is entirely tube-fed and is attached to a ventilator 24-7, requiring round-the-clock nursing. Until recently, the thought of taking him anywhere, much less abroad, was a pipe dream. Firstly, there’s the vast amount of equipment that needs to travel with him. Not just all the stuff he needs to keep him alive – suction machines, ventilators, catheters, feeding kit, etc, etc… but two of everything because you can’t risk having something like a ventilator break, leaving Felix unable to breathe. So you have to carry a spare ‘just in case’. Then, because Felix needs to be monitored and tended to 24 hours a day, you have to take a couple of nurses if you want to be able to actually do anything as a family. The combination of a (literal) truck-load of medical equipment, combined with the cost of travel and accommodation for two extra people pushes organizing and paying for a trip away out of the reach of an ordinary family like ours.

So when The Dream Factory stepped in and offered to arrange and fund a 6 day trip to Disneyland Paris for Felix and his family it was, quite literally, a dream come true. We told Felix about the trip 6 weeks before we left. That’s a long time for the excitement to build, and build it most certainly did.

Finally the day arrived. Danny, my husband, and one of the nurses, Angela, loaded up the van with medical equipment, feed, chargers and the rest and set off for the Channel Tunnel at 6am. I set off a few hours later with Felix, his sister Evie and the other nurse, Iram, for the Eurostar Disney Express. We’d told Felix that we were going on a special train that went ‘under the sea’ so he was a little disappointed not to be greeted with a scene from The Little Mermaid out of the window but, nevertheless, he found the train journey thrilling. Because of Felix’s disabilities he has only left London on a couple of occasions, even a train journey is a big deal to him.

Walking into the Disney park with Felix for the first time was a moment that none of us will forget. Disney know how to create an entrance and, as the famous fairytale castle came into view, Felix took my hand and whispered “it’s so magical!” With perfect timing, we arrived just in time for the parade. Felix watched enraptured as Mickey, Minnie, Donald and every character that he had ever dreamed of went past. And, when Beauty and the Beast waved and blew kisses especially for him, I thought he might actually burst with joy.

The Dream Factory had arranged for Felix to get one of the coveted ‘Blue Lanyard’ passes, especially for children on wish trips. This pass, that Felix wore proudly round his neck the whole time, ensured that he was treated like royalty everywhere he went. At first he was reluctant to go on any rides, too scared of doing something so utterly unfamiliar, but after his first go on ‘A Small World’ he was a convert. “More rides, more rides!” became the phrase of the day. A trip on a paddle steamer, Buzz Lightyear’s Laser ride, Alice in Wonderland’s maze, Captain Nemo’s submarine… There were so many new things for Felix to do and, everywhere we went, more characters to meet and talk to. As the days went on, and he grew in confidence and familiarity, he learnt to whizz around the park looking for new adventures. We took a thousand photographs of our little boy who never stopped smiling.

One day we decided to take advantage of what might well be Felix’s only opportunity to go abroad, and we took the Metro into Paris itself. There we took Felix sightseeing – to the Eiffel Tower and the Arc De Triomphe – and then for lunch in a cafe on the Champs Elysees. More smiles, more photographs and memories that we will all treasure forever. Our little boy, who has barely left his own local area, was amazed and excited by being in a foreign country. New sights and sounds, people speaking another language, he was fascinated by everything.

On the last night, as we tucked Felix into bed in his hotel room, he threw his arms around me and whispered “I love Disneyland’. It’s hard to put into words what a trip like this means to us as a family.

We all shared in Felix’s joy and revelled in the opportunity to have new experiences together. We built memories that will last a lifetime. We may never get a chance to go away all together like this again, but at least we have had this time and I know that we will always treasure it. Since we’ve been home our conversations have been peppered with “remember in Disneyland when…” and the photographs have been pored over every day. Felix has finally been abroad and experienced being in a foreign country and hearing a strange language. When people talk about Paris he will have his own memories and feelings about the city.

This trip has expanded his world and his mind in so many ways. He has learnt a huge amount and his understanding of the world had grown immeasurably. And, most important of all, he was able to share all this with the people who mean the most to him, his family. It is no exaggeration to say that this experience has been life-changing.

We are beyond grateful to Sue and all the team at The Dream Factory. I know how much work went into organising this extremely complex trip, making sure that everything went smoothly. Even for the team, already experienced at planning trips for disabled children, Felix’s holiday presented some new challenges. But we will never forget it; and Felix’s life is immeasurably richer because of it. From all of us, thank you. 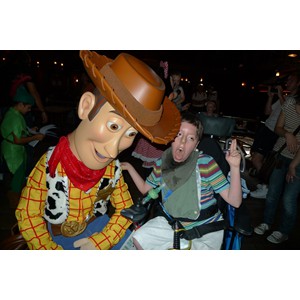 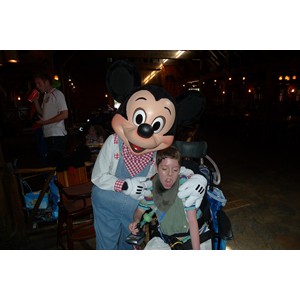 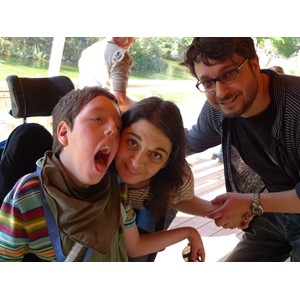