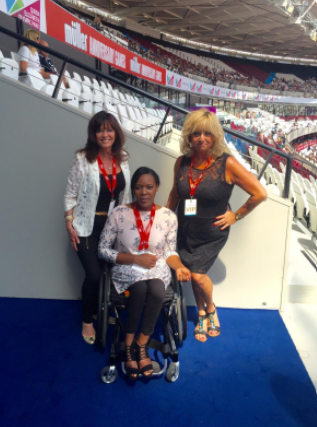 A MOTHER who was inspired to start a charity after the death of her son was a guest at top sporting games.

Hainault-based The Dream Factory founder, Avril Mills, was invited to the Muller Anniversary Games at the Olympic Stadium by charity patron, wheelchair racer Anne Wafula Strike.
She was joined by fellow patron, Vicki Michelle, and met a range of athletes and celebrities including runners Kriss Akabusi and Colin Jackson television presenter Eamonn Holmes. Ms Mills said: “We had a lovely day in the VIP area where I was introduced to many amazing athletes and celebrities; many of whom signed an official London 2012 brochure which I intend to auction at our Hollywood Ball. “I was introduced to many officials from the UK Athletics Board who do an incredibly great job to host athletics in this country for able-bodied and disability sport, including Anne herself. “I have only watched very little athletics on television but to be up close with the superstars of athletics has ignited my love for the sport.” The Epping resident launched The Dream Factory after her son, Oliver, died of leukaemia at the age of nine. She added: “In the work we do we hope that some of the children we support will one day have a dream fulfilled of meeting some of their athletics superstars when they come back home with medals from Rio.” Paralympian Anne devotes much of her time to the charity and became a patron last year.
PrevPreviousThe Dream Factory to hold Bridal Event
NextWanstead Golf Club Raise 7kNext