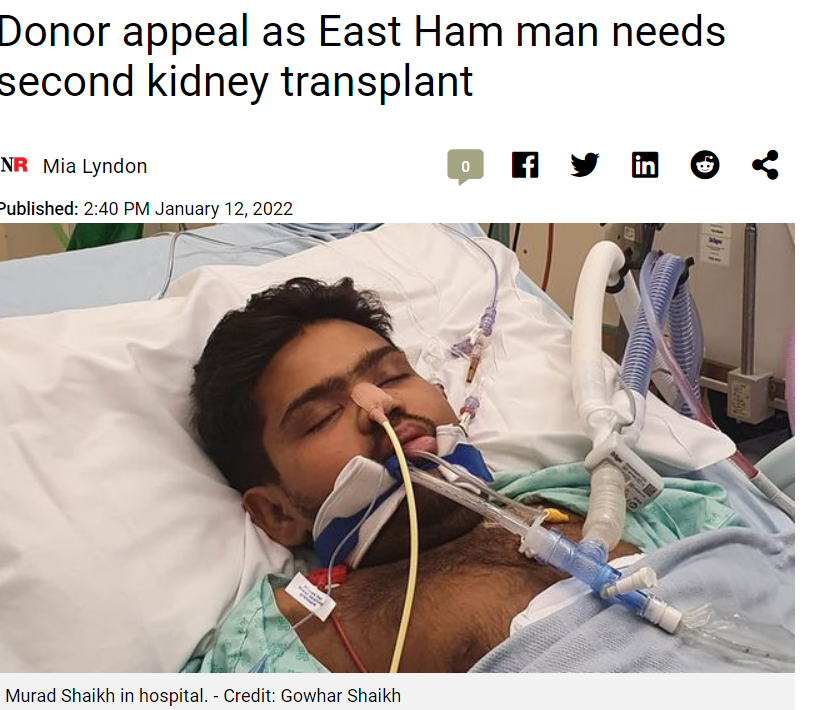 The mum of a young man in need of his second kidney transplant has made an appeal for potential donors to come forward.

Murad Shaikh, 23, was born with kidney failure and a rare blood condition, and has received complex treatment since birth.

His mother, Gowhar Shaikh, said: “He was given 48 hours to live when he was born – he was on medication and had to go to hospital.

“He got to nine and then he was put on call for a [kidney] transplant.

“Two days later, we got a call that they had a kidney for him – it was a kidney of a 45-year-old cadaveric person.”

Despite his adversities, Murad, from East Ham, has lived full and happy life. He loves singing, dancing and has recently passed levels one and two in digital skills at college. “He’s had a wonderful quality of life – he’s just small in his height because he’s got a rare condition, called Fanconi anaemia.  There are about 64 known families in London [with the condition],” said Gowhar.

Murad’s donated kidney was a “miracle” for his family – but it’s not a permanent solution.

“In November 2021, his levels went really high, we went to the hospital, and then he went into a coma,” said Gowhar.

Murad has since been receiving haemodailysis three times a week at Guy’s Hospital. This won’t change until he is successfully added to the transplant list.

“A kidney transplant isn’t a ‘fix it, that’s it’ – you still have to go to hospital, have regular blood tests, change drugs – so we know he only has a little time left [with his existing kidney].

“We’re being worked up now to go back onto the transplant list. We don’t know how long we’re going to have to wait.”

A kidney from a deceased donor can last between 15-20 years, whilst a donation from a healthy person can be effective for up to 25 years, according to the NHS.

“Murad has a B+ blood group, so we need somebody similar. This time they say that they want a smaller kidney, because last time it was a 45-year-old’s,” said Gowhar.  Individuals can also help by donating blood though Give Blood.