Freedom of the Borough 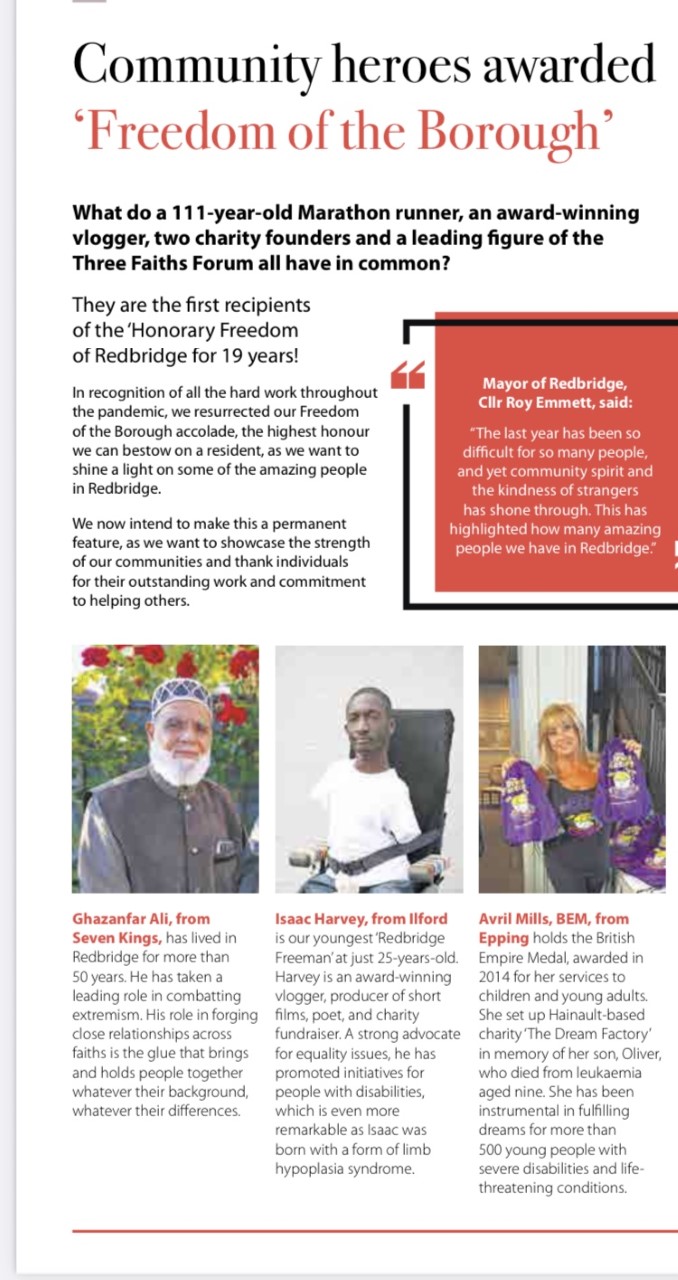 What do a 111 year-old Marathon runner, an award -winning vlogger, two charity founders and a leading figure of the Three Faiths Forum all have in common?

They are the first recipients of the ‘Honorary Freedom of Redbridge’  for 19 years!

In recognition of all the hard work throughout the pandemic,  we resurrected our Freedom of the Borough accolade, the highest honour we can bestow on a resident, as we want to shine a light on some of the amazing people in Redbridge.

We now intend to make this a permanent feature, as we want to showcase the strength of our communities and thank individuals for their outstanding work and commitment to helping others.

Mayor of Redbridge Cllr Roy Emmett said: The last year has been so difficult for so many people, and yet community spirit and the kindness of strangers has shone through.  This has highlighted how many amazing people we have in Redbridge.

Ghananfar Ali from Seven Kings has lived in Redbridge for more than 50 years.   He has taken a leading role in combating extremism.  His role in forging close relationships across faiths is the glue that brings and holds people together whatever their background, whatever their differences.

Isaac Harvey, from Ilford is our youngest  ‘ Redbridge Freeman’ at just 25 years old.  Isaac is an award-winning vlogger, producer of short films, poet, and charity fundraiser.  A strong advocate for equality issues, he has promoted initiatives for people with disabilities, which is even more as Isaac was born with a form of  limb hypoplasia syndrome.

Avril Mills, BEM from Epping holds the British Empire Medal, awarded in 2014 for her services to children and young adults.  She set up the Hainault based charity  ‘The Dream Factory’ in memory of her son, Oliver, who died from leukaemia aged nine.  She has been instrumental in fulfilling dreams for more than 500 young people with severe disabilities and life-threatening conditions