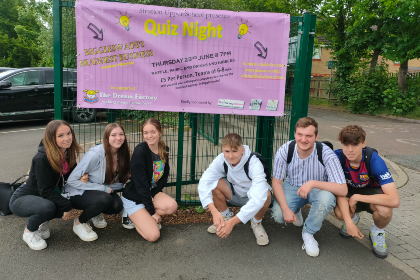 Ruby Joyce’s friends wanted to raise money for the charity that helped her dreams come true before she died.

Friends of a Beds teenager who died from a rare form of cancer honoured her memory with a school quiz – raising more than £1,600 for the charity that helped her achieve her dream of owning a dog.

Ruby Joyce had Ewings Sarcoma, a form of bone and blood cancer and died in December 2019. The 13-year-old Stratton Upper School pupil was treated to a number of VIP experiences before her death by The Dream Factory – including being given a puppy she named Star.

The Dream Factory was set up to grant wishes and dreams to children and young people with life-limiting illnesses. And Stratton Upper School business and finance teacher Angela Fisher said it was an “easy choice” for the school’s enterprise after school club when it came to picking a charity to benefit from their event.

She said: “As part of preparing our students for life outside the classroom and to enhance their employability, at Stratton Upper School we offer an enterprise club after school for students to build on their academic studies with what we might say are ‘real life skills’. This year the students wanted to organise a charity event and a quiz night was the favoured idea.

“When asked about which charity they wanted to support, it was an easy choice. These students are the same age as Ruby and include some of her closest friends.

“This has made organising this event quite personal and they love the fact that the money they are raising is going to The Dream Factory. We would like to thank Satchells Estate Agents, Surfin Café and Harvey Robinson who kindly sponsored the quiz night.”

Before Ruby’s death the teenager and mum Anna were taken to visit Battersea Dogs Home in a limousine filled with goodies then treated to lunch at one of Ruby’s favourite restaurants Dip and Flip. Ruby was also presented with a Golden Retriever puppy to help her through her treatment.