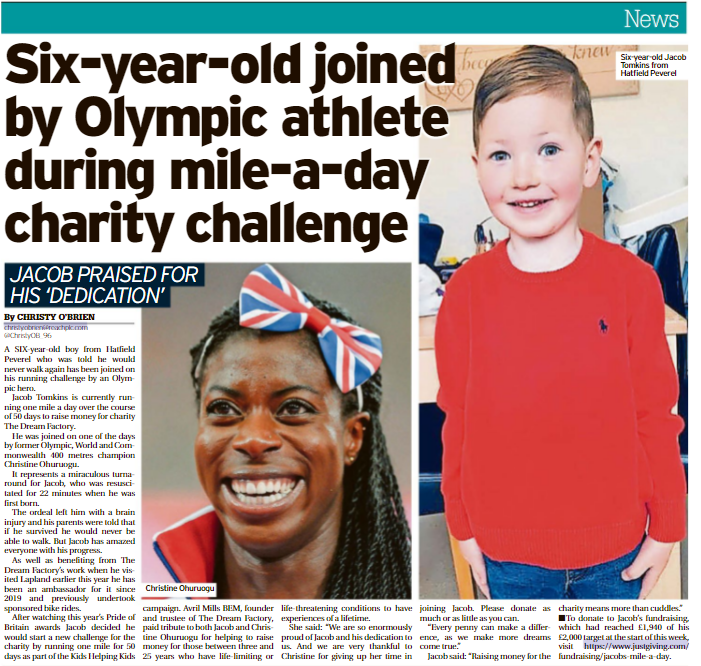 Jacob praised for his ‘dedication’

A six-year-old boy from Hatfield Peverel who was told he would never walk again has been joined on his running challenge by an Olympic hero.

Jacob Tomkins is currently running one mile a day over the course of 50 days to raise money for charity The Dream Factory. He was joined on one of the days by former Olympic, World and Commonwealth 400 metres champion Christine Ohuruogu. It represents a miraculous turn-a-round for Jacob, who was resuscitated for 22 minutes when he was first born. The ordeal left him with a brain injury and his parents were told that if he survived he would never be able to walk. But Jacob has amazed everyone with his progress.

As well as benefiting from The Dream Factory’s work when he visited Lapland earlier this year he has been an ambassador for it since 2019 and previously undertook sponsored bike rides.

After watching this year’s Pride of Britain awards Jacob decided he would start a new challenge for the charity by running one mile for 50 days as part of the Kids Helping Kids campaign. Avril Mills BEM, founder and trustee of The Dream Factory, paid tribute to both Jacob and Christine Ohuruogu for helping to raise money for those between three and 25 years who have life-limiting or life-threatening conditions to have experiences of a lifetime.  She said: “We are so enormously proud of Jacob and his dedication to us. And we are very thankful to Christine for giving up her time in joining Jacob.

■To donate to Jacob’s fundraising, which had reached £1,940 of his £2,000 target at the start of this week, visit https://www.justgiving.com/fundraising/jacobs-mile-a-day.